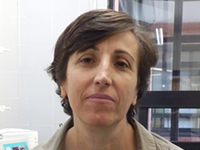 RESEARCH INTEREST
Dr. Yebra has extensive experience working on carbohydrate metabolism, regulation and molecular genetics of lactic acid bacteria. In the last few years she is interested in elucidating the role of human milk oligosaccharides (HMOs) in infant gut bacterial colonization. Human milk contains a large number of oligosaccharides and much evidence suggests that they are associated with the protective effect of human milk against gastroenteritis through its prebiotic effect, thus stimulating beneficial bacteria growth in the colon, but also through competitive inhibition of binding (anti-adhesion) of entero-pathogens to the host cells. The general objectives of the lab are (i) the molecular and functional characterization of the HMOs metabolic pathways in lactic acid bacteria; (ii) evaluation of the HMOs prebiotic activity and (iii) the analysis of the blocking activity exerted by specific HMOs into the pathogens attachment to their receptors. Since oligosaccharides are abundant in human milk but not in infant formula, we are also interested in the identification, and molecular and functional analysis of glycosidases to synthesize HMOs-like through their transglycosylation activity. Another research area of the lab is the development of metabolic engineering strategies for the production of biotechnological important metabolites in lactic acid bacteria.