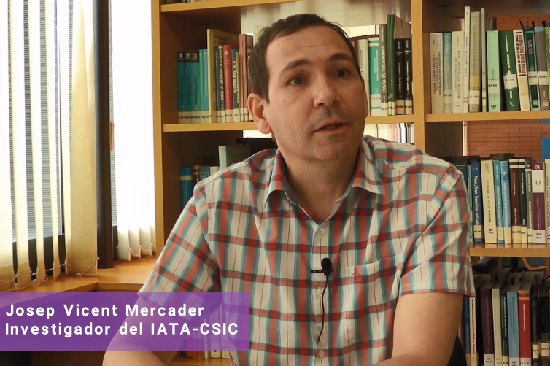 IATA has been gradually resuming its research activity in recent weeks. We have talked to the research staff to find out how they are recovering and how this hiatus has affected their research projects.

This week we interviewed Josep Vicent Mercader, who, together with Antonio Abad, heads the "Food Analytical Immunotechnology" group

The line of work of Antonio Abad and Josep Vicent Mercader is based on the development of rapid analytical methods based on antibodies for the detection of chemical residues (pesticides, growth regulators, additives, antibiotics), toxins and organic contaminants in food and environmental samples.

Its mission is to provide companies and the fruit and vegetable production sector with useful analytical tools to improve food quality and contribute to a lower exposure of consumers to substances potentially harmful to health.

Question: You are one of the groups that has not been able to stop research throughout the confinement. What are you working on? Why has it been impossible for you to stop?

Answer: In our laboratory we carry out both research and development activities. Our research projects focus on the design of new molecules that allow us to generate antibodies with high affinity and specificity against chemical contaminants in food. We use these bioreceptors for the development of new rapid analytical methods that contribute to guarantee the quality and safety of food. In short, we investigate alternative or complementary methodologies to those currently available that allow the determination of toxic contaminants quickly and economically, that are portable and simple to use, but at the same time are reliable, that is to say, they have sufficient sensitivity and robustness. To obtain the antibodies we use laboratory animals and generate new cell lines that produce them. We carry out these studies thanks to research projects in public calls for proposals, and we also have contracts with companies in both R+D and scientific-technical services.

And this explains a little bit why we have not been able to stop completely during the confinement. In fact, the laboratory was virtually closed for the entire period of the Alarm State. At the beginning of the confinement we had several doctoral theses and other research work underway that were completely stopped. However, we had animals that had been immunized to produce antibodies for many months that could not be abandoned. In addition, we had managed to generate unique cell lines in the world, capable of producing monoclonal antibodies to certain toxins, which needed to be stabilized so that they would not be lost. On the other hand, we had unavoidable commitments with foreign companies that had to be met. For all these reasons, those in charge of the laboratory were coming for the minimum time necessary during the confinement. The rest of the activities were recently resumed when the laboratory staff was able to return.

Q: IATA donated almost all of the laboratory equipment to the health institutions.

A: Not at all. As I told you, the laboratory was practically closed. The only facilities we have kept running have been those of the Cell Culture laboratory. As these are very long and critical processes, we always have an important stock of material to avoid unforeseen events, so we have not had to acquire anything during the confinement.

Q: You have recently developed antibodies capable of determining mycotoxins in foods that you have patented and licensed to a company or are waiting for patenting or licensing. What is the current status of these studies? Why are these mycotoxins so harmful and where can we find them and what can be produced when we ingest them?

A: In recent years we have filed and licensed several patents, some of them to protect certain innovations achieved in our laboratory in the area of analytical chemistry of mycotoxins. Specifically, these are new molecules that we have designed and new antibodies that have been generated against ochratoxin A and patulin. We are also currently preparing a patent for the aflatoxin family. These are all toxins that can be present in food due to the growth of certain fungi during the production, storage or distribution of food. Their effects on the body are diverse, but mainly affect the kidney and liver producing organ failure and ultimately even cancer. Therefore, it is interesting to have rapid analytical methods for detection in food.

Ochratoxin A is a mycotoxin frequently found in wine, although fortunately the amounts commonly found are not of concern. However, climate change is causing an increase in the presence of the fungus in vineyards which could lead to an increase in the levels of this toxin. On the other hand, patulin is a very common mycotoxin in apples and products derived from this food matrix. In this case it is of particular concern because apples, as well as their juices and compotes, are highly consumed by children.

Q: What other methods have you developed during your career?

A: As I have just mentioned, our projects have recently focused on the study and development of new methods for the rapid analysis of mycotoxins in food, but in general the aim of our laboratory is any type of chemical contaminant potentially present in food.

In addition, we have also developed analytical methods for a toxin produced by a freshwater algae, anatoxin-a, for which we are the only ones in possession of immunoreagents (antibodies and bioconjugates). This technology is patented and has been transferred to the industry.

On the other hand, in the last years we have developed numerous methods of analysis for the determination of residues of many fungicides of different families in food. We are probably the research group that has developed more immunochemical methods worldwide for the determination of this type of pesticides. We have also licensed specific immunoreagents for an insecticide and an antibiotic.

Some of these developments have also been transferred to the industry. As a result, IATA has an important collection of bioconjugates and antibodies against a large number of contaminating substances, which allows us to establish collaborations with companies interested in exploiting these reagents, as well as to participate in R&D projects with other scientific institutions.

Link to see the video interview