IATA CSIC researchers find out how lactobacilli 'communicate' with our organism 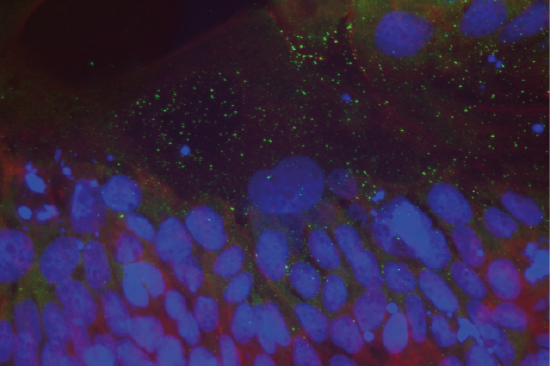 Researchers from the laboratory of Lactic Bacteria and Probiotics of the Institute of Agrochemistry and Food Technology (IATA), dependent on the Spanish National Research Council (CSIC), have discovered the presence of proteins that protect the epithelium, the internal lining of our body, adhered to extracellular vesicles of the Lactobacillus casei bacteria, a probiotic widely used in the dairy industry. It is these proteins located outside the bacteria that induce processes in the intestinal cells that protect them from toxic elements. The results have recently been published in the magazine Scientific Reports.

Bacteria produce extracellular vesicles (EV). These are emitted to the external environment carrying an important load of proteins, nucleic acids and metabolites in its interior. In the case of intestinal and probiotic bacteria such as Lactobacillus casei, which live in our body and provide anti-inflammatory and regenerative effects, EVs have an interesting potential as signal transmitters to the body in the digestive tract.

The IATA-CSIC research group led by Gaspar Pérez Martínez has just published in the Scientific Reports magazine a study that shows that the mechanism of biological action of extracellular vesicles, curiously, can be independent of the components of their internal charge.

"The extracellular vesicles of the probiotic bacterium Lactobacillus casei attract certain extracellular proteins of this bacterium that remain adhered to its surface, and it is these proteins that induce signaling mechanisms in the intestinal epithelial cells that lead to their protection against toxic elements," explains Gaspar Perez.

Specifically, these are the proteins p40 and p75, which have different functions. In the bacterium they are necessary for the growth of its external cover (cell wall), but they also participate in the communication with the organism since they regulate processes in the intestinal cells. Now, the research developed at IATA-CSIC has observed them attached to the extracellular vesicles of the probiotic bacteria, opening the door to check if their effect is maintained without using the whole bacteria.