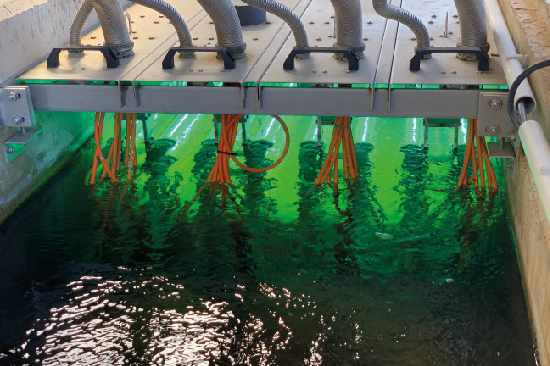 Researchers from the Spanish National Research Council (CSIC) and the University of Valencia have developed a molecular analysis system that can alert the circulation of the coronavirus SARS-CoV-2 (which causes Covid-19 disease) in a community by studying its wastewater. The analysis system, which could be useful as an epidemiological surveillance method, has been tested in six treatment plants in the Region of Murcia and in three treatment plants in the metropolitan area of Valencia. The analyses have shown that the disinfection treatments in the treatment plants are effective in eliminating the presence of the virus.

The new analysis system has been developed by researchers from two CSIC centres and a mixed centre of the University of Valencia and the CSIC. In Valencia, the analyses have been carried out by researchers from the Institute of Agrochemistry and Food Technology (IATA-CSIC), led by Gloria Sánchez and Walter Randazzo, and from the Institute of Integrative Systems Biology (I2SysBio), a mixed centre of the CSIC and the University of Valencia, led by Pilar Domingo-Calap and Rafael Sanjuán. The analyses in the Region of Murcia have been carried out by the team of Sánchez and Randazzo, from IATA, together with the team led by Ana Allende and Pilar Truchado, from the Centro de Edafología y Biología Aplicada del Segura (CEBAS-CSIC).

In the Region of Murcia, the study was launched by the Entity for Sanitation and Wastewater Treatment in the Region of Murcia (ESAMUR) in collaboration with the IATA-CSIC and CEBAS-CSIC research groups. "The research groups have been taking samples since 12 March and during this time more than 60 samples have been analysed at different points in the region's six treatment plants, including effluent, secondary treatment output and effluent," explains researcher Ana Allende of CEBAS-CSIC. The first objective was to determine whether the SARS-CoV-2 coronavirus was present in the wastewater and the effectiveness of the disinfection treatments implemented in the treatment plants," she adds.

In Valencia, these studies have been carried out in collaboration with the wastewater treatment plants (EDAR) of Pinedo 1 and 2 and Quart-Benàger, which depend on the Ministry of Agriculture, Rural Development, Climate Emergency and Ecological Transition of the Generalitat Valenciana. The researchers are analyzing more treatment plants in the Comunitat Valenciana, as well as samples collected on different dates before the first positive patients of Covid-19 in Spain. "The aim is to establish this type of analysis as a method of epidemiological surveillance. Detecting changes in the presence of the genetic material of the virus in urban wastewater over time and in different points of the Comunitat will give us information on the prevalence of the virus in the population and its progression", says Pilar Domingo-Calap, researcher at I2SysBio.

To carry out the study, the researchers have applied methods previously developed by the IATA-CSIC group for the detection of food-borne viruses. "The results obtained by molecular techniques to date, using samples from last week, detect concentrations of approximately 100,000 copies of genetic material of the virus per liter of wastewater," details researcher Gloria Sanchez, from IATA-CSIC. These levels are comparable to those obtained in the United States. Other recent studies in the Netherlands and China have also detected the presence of SARS-CoV-2 in wastewater. The study has shown that the disinfection treatment succeeds in eliminating the presence of the virus.