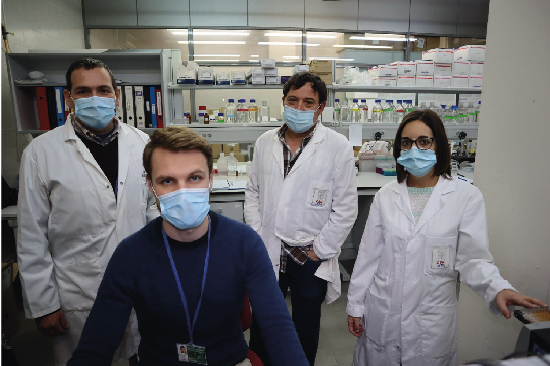 Researchers from the Institute of Agrochemistry and Food Technology (IATA), a center of the Spanish National Research Council (CSIC), in collaboration with the University of Valencia, have developed a new analytical method that allows the rapid and ultra-sensitive detection of patulin in food. This toxin is produced by several species of fungi when they contaminate apples, and can be found in derived products, including food for children. It is the first time that this toxin is detected with immunoanalytical methods based on antibodies, which are more specific and economic than other techniques used in the industry.

Patulin is a secondary metabolite produced by fungi of diverse genus, being Penicillium expansum, a fungus that causes multiple losses in fruits, its main producer. The presence of this mycotoxin is common in apples and their by-products. According to the World Health Organization, acute symptoms produced by this toxin in animals include liver, spleen and kidney damage, as well as toxicity to the immune system. Nausea, gastrointestinal disorders and vomiting have been described in humans. It is considered genotoxic (capable of producing damage to genetic material), but its carcinogenic potential has not yet been demonstrated.

Consequently, the European Food Safety Authority has set very high maximum levels of patulin in apples (25 micrograms per kilo, μg/kg), juices and other derivatives (50 μg/kg), and especially in foods for babies and young children (10 μg/kg). The presence of patulin in food, besides being of toxicological concern, is considered an indicator of poor quality raw material.

Traditional methods to detect these compounds are based on separation (chromatography), and require large and complex devices. In contrast, immunoanalytical methods are based on detection by antibodies and are therefore simpler. Until now it had not been possible to generate antibodies against patulin due to its small size and high reactivity. Thus, the work carried out by the group of Food Analytical Immunotechnology (FAIg) of IATA-CSIC and the University of Valencia is the first immunoassay developed for this mycotoxin capable of determining its presence in food in a fast and economic way.

"The generation of monoclonal antibodies of high affinity for patulin had become a very pursued objective during the last decades", comments Josep Vicent Mercader Badia, researcher of the group responsible for the study at IATA. "For the first time we have managed to develop a technology that allows the rapid crude and quantification of patulin in apple extracts and its derivatives. These innovative developments will undoubtedly result in the reduction of the levels of this mycotoxin in food", he summarizes.

The immunoanalytical methods are fast, simple and economic techniques very much implanted in the determination of mycotoxins in the agro-food industry. They are very sensitive and specific analytical methods that, due to their great versatility, can be adapted to portable equipment and procedures for on-site analysis (they even allow reading the results with a cell phone).

The companies Abraxis-Eurofins (USA) and R-Biopharm Rhône (Scotland), world leaders in the field of immunodiagnostics in food, will exploit this patent, enabling them to be the only suppliers of rapid methods for the analysis of patulin in food. The objective is to commercialize worldwide the technology developed at IATA using different immunochemical methods of analysis.

The group of Food Analytical Immunotechnology of IATA-CSIC has a wide experience in the development of rapid analytical methods based on antibodies for the detection of agrochemical residues (pesticides, growth regulators, additives and antibiotics), all kinds of toxins and organic contaminants in food and environmental samples.