CEMAS, to which Cristina M. Rosell is a member of the advisory committee, has been inaugurated with the presence of Queen Letizia. 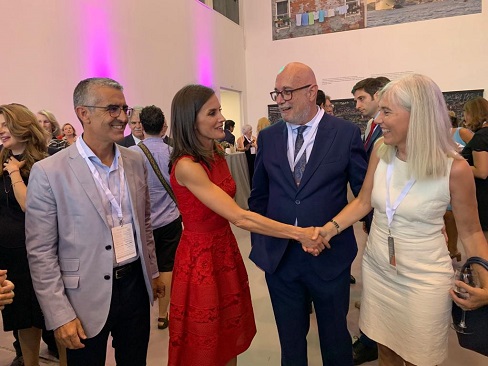 Queen Letizia presided over the presentation of the World Centre for Sustainable Food (CEMAS) on Monday, promoted by the City Council of Valencia and the United Nations Food and Agriculture Organization (FAO), whose aim is to identify and raise awareness of the challenges facing cities in terms of food and nutrition.

The event, held in the building of La Base de la Marina de València, headquarters of CEMAS, was attended by the president of the Generalitat Valenciana, Ximo Puig; the director general of FAO, José Graziano da Silva; the mayor of Valencia, Joan Ribó; the 2007 Nobel Peace Prize winner, Edward Rubin, and the activist for sustainable food, Vandana Shiva.

CEMAS aims to be an active tool for cataloguing, archiving and orienting the policies, strategies and actions of the world's cities and their territorial environments in order to achieve sustainable local food systems within a framework of rights. It is conceived as a reference organ to combat malnutrition and the obesity "pandemic".

Cristina Molina Rosell, Research Professor and Director of the Institute of Agrochemistry and Food Technology (IATA) belongs to the Advisory Board along with members of other United Nations agencies (such as WHO, Habitat ...), and research centers, the production sector and the private sector.