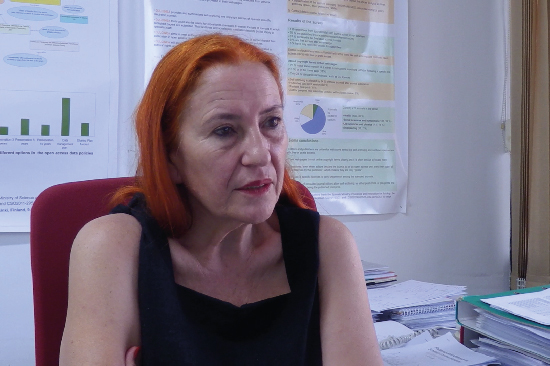 IATA has been gradually resuming its research activity in recent weeks. We have talked to the research staff to find out how they are recovering and how this hiatus has affected their research projects.

This week we interviewed Remedios Melero

Remedios Melero, is a researcher at the Institute of Agrochemistry and Food Technology, coordinates the Spanish working group on Open Access to Science and is currently working on a national project related to research data and open science. She is a member of the thematic network MAREDATA, and has been a partner in the FOSTER+ project (Facilitate Open Science Training for European Research) for the promotion of European policies in the field of open science and related training.

Question: What is the current scenario for scientific publications and Open Access under the umbrella of Open Science?
Answer: There is no single definition of open science but we could talk about a holistic conception or vision of all the stages and actors involved in the generation and communication of science. Transparency, visibility, reproducibility, openness, sharing, collaboration, citizen participation, are some of the terms involved in open science. Allowing, opening and sharing data in a responsible way and with recognition of the creators benefits science in general, since it makes it possible to reuse data for other purposes, add to new sets, recalculate, etc., and allows to save many efforts both economic and temporary.  Open publications allow the removal of access barriers to communities that cannot afford the sometimes abusive payment for access to subscription-based content, increase the visibility of their content and its impact on scientific communities, foster collaboration between working groups and make access to research universal. Therefore, access to knowledge as a common good must be guaranteed above all at times when this access can contribute to public health or to the advancement of science in general.

The first fully digital and open access journals are emerging at the beginning of the 21st century. There are different models of open access journals, from those that are free for readers and authors, which also have open licenses for reuse, to those that are paid for publication. The publishing world is not governed by supply and demand, so the prices for both access and publication are not in line with the laws of the marketplace. Seeking new ways to reward for services rendered and not for access to content would change the traditional status of communicating and disseminating the results of science. The emergence of new business models or management of open access academic journals has been rampant in recent years, cooperative type models, such as the OHL, in which each member, the libraries, pay a fee per journal created. Or the one-time fee for publication initiated by the Peerj journal (a model that no longer exists). The pay-per-publication model (APCs) is the most widespread among commercial publishers, with prices sometimes exceeding $5,000. It is only admissible for researchers with projects that allow this expense as a justifiable cost. In what is known as Globlal South, this license is far from acceptable, and they have opted for collaborative models in the creation of infrastructures that allow free publication with the institutions themselves assuming the costs. Europe has opted for open access in its research funding policies, although the objective for 2020 of achieving open access to scientific production is still far from 100%. In Spain, if we exclude commercial publishers, the open access journal model of universities and research centres is a model of free journals with Creative Commons licenses that allow the reuse of works under the conditions established by the managers of the journals.

Q: During these months of the pandemic, there have been many scientific publications on SARS-CoV-2. What mechanisms are being used worldwide to share this knowledge that is being generated at full speed?

A: There have been several ways: some publishers in the face of an emergency such as the COVID pandemic19 have allowed publications related to this topic to remain open. Specific collections have been created within institutional or thematic repositories where articles on the virus are collected (e.g. at Digital.CSIC). This in turn allows repository aggregators or collectors to add content that enables data mining and even artificial intelligence applications, for which they obviously need to have access.

The speed and reliability of the data are relevant in a pandemic situation like the one we are in. In this sense, it is very important to know the origin of the data and its quality. In relation to this, we should highlight two works that have been widely commented on in the media and which the authors have had to retract. These are two articles published in two very prestigious journals in their field, The Lancet and the New England Journal of Medicine (NEJM), on the use of hydroxychloroquine in the treatment of COVID-19, which were retracted due to the lack of transparency in obtaining the data and the reliability and quality of the data. In this case, the prestige of the journal was not sufficient to guarantee the quality of the papers.

Q: In recent months some publications have generated controversy because they are preprint, that is, publications that have not yet been peer-reviewed. Publishing in a journal is often a slow process. Why? Could these processes be streamlined?
A: There is a certain reluctance on the part of publishers and authors to make preprints public before submitting them to a journal, and there are also scientific communities that are very accustomed to doing so, such as high-energy and computer physicists whose preprints have been deposited in the Arxiv thematic repository for more than twenty years. The same is true of research data such as GenBank where genetic sequences of different species are deposited.

Most of the preprints repositories are disciplinary, some allow a previous peer review made by the scientific community itself, which facilitates the improvement or detection of any incidence. There are also platforms such as Prereview that collect preprints from different repositories and allow you to add or request a review prior to submitting the work.

Another functionality of the preprints repositories is the publication of overlay journals, or what is the same, journals that are supplied by the works previously deposited in the repositories and that go through a formal evaluation like any other. Two other noteworthy initiatives are the recently created Scielo Preprints repository which houses preprints before or after their pre-publication evaluation. Another important pilot project of the National Library of Medicine is the inclusion of preprints of those works funded by the National Institutes of Health (NIH) in PubMed to accelerate their visibility. In addition, this same institution has created a search engine for locating preprints related to SARS-CoV-2, called COVID-19 Portfolio, from arXiv, bioRxiv, ChemRxiv, medRxiv, Research Square and SSRN. The Portfolio is updated daily, allowing the inclusion of the latest new open source research very quickly.

In summary, putting up barriers to pioneering research on a health issue such as the one facing us at COVID19 is a risk for humanity, which is why open access to infrastructures, publications and data are of vital importance in a time of health emergency, above all because most of them are financed by public funds. Reliable preprint repositories that comply with interoperability standards are an alternative for locating work quickly and thus being able to speed up the progress of research without having to wait for publication, which usually takes weeks or months.

Link to see the video interview