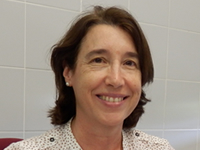 Dr. María Concepción Aristoy Albert is a Scientific Researcher at the Department of Food Science, Institute of Agrochemistry and Food Technology (IATA-CSIC) in Valencia (Spain). Dr. Aristoy graduated (1982) in Food Science and Technology and obtained her Ph.D. (1987) in Pharmacy from the University of Valencia, Spain. She obtained by competitive examination a Senior Technician position at IATA, as head of the Liquid Chromatography Analysis Service (1986 to 1990). In 1990 she joined the Laboratory of Biochemistry, Technology and Innovation of Meat and Meat Products belonging to the Department of Food Science of the IATA-CSIC. In 2003 she acquired the position of Principal Investigator of the Public Investigation Organizations and, later, she acquired the position of A3 Investigator (from 2020 to date). She is currently responsible for the analytical techniques of her research group with greater dedication to chromatographic analysis including sample preparation and fractionation, analysis, data processing and interpretation of results.
The main area of interest of her research was framed within the field of meat and meat products, although, currently, she has expanded it to other protein foods of animal origin such as those derived from fishing.
More specifically, her research mainly deals with the following topics:
1-Development of fast and reliable methodologies for the analysis of compounds with nutritional value in food and feed, the detection and analysis of illegal substances and / or pollutants, and the control of manufacturing processes.
2-The study of the chemical and enzymatic mechanisms responsible for the generation and perception of color, aroma, and flavor in meat and meat products. It included the effect of reducing salt on the sensory characteristics of meat products to make them healthier.
3-The proteomic characterization of proteins and peptides with various bioactivities and their contributions to food flavor, as well as their potential use as quality markers.
4-The metabolomic study of meat and its derived products with a view to establishing the profile of compounds with functional activity and developing enzymatic mechanisms to enhance their presence in said products and by-products.
5-Valorización de coproductos de origen animal y vegetal mediante la obtención, a partir de ellos, de sustancias de alto valor añadido.
She has published 33 book chapters and 129 articles in international journals (SCI) of which in the last 10 years, more than 75% are in the first quartile (Q1). These articles have received an average of 38.7 citations per document, having been cited 4,919 times, of which more than 3,600 are not citations of her own.
She has participated in 32 R+D+i projects financed in competitive calls, by regional, national and international public administrations.
She has participated in 8 projects financed by Spanish or European companies.
She has directed 9 doctoral theses and 10 research projects that include Master's and Final Degree Projects.